Mt. View was dispatched to provide mutual aid on a 20 acre grass fire in Diablo Canyon west of Patterson.
Overturned big rig into a canal

When used properly, a portable fire extinguisher can save lives and property by extinguishing a small fire or containing it until the fire department arrives. Portable extinguishers, however, are not designed to fight a large or spreading fire. Even against small fires, they are useful only under certain conditions.

1) The extinguisher must be rated for the type of fire you intend on using it on.

2) The extinguisher must be large enough to extinguish the fire. Most portable extinguishers discharge completely in as few as eight seconds.

3) The extinguisher must be within easy reach and in working order, fully charged.

4) The operator must know how to use the extinguisher. Read the instructions when you buy it. There is no time to read directions during an emergency.

5) The operator must be strong enough to lift and operate the extinguisher.

Should you fight the fire?

Before you begin to fight a small fire:

1) Make sure everyone has left, or is leaving the building.

2) Make sure the fire department has been notified.

3) Be certain that the fire is confined to a small area, such as a wastebasket, and that it is not spreading beyond the immediate area.

4) Be sure that your back is to a safe and unobstructed exit to which the fire will not spread.

5) Be sure that your extinguisher is the proper size and type for the fire at hand and that you know how to use it.

6) It is reckless to fight a fire with an extinguisher in any circumstances. Instead, leave immediately, close off the area, and leave the fire for the fire department.

If you do fight the fire, remember the word: P.A.S.S.

PULL the pin. Some extinguishers require releasing a lock latch, pressing a puncture lever, or taking another first step.

AIM low. Point the extinguisher nozzle (or it's horn or hose) at the base of the fire.

SQUEEZE the handle. This releases the extinguishing agent.

SWEEP from side to side. Keep the extinguisher aimed at the base of the fire and sweep back and forth until it appears to be out. Watch the fire area. If fire breaks out again, repeat the process. 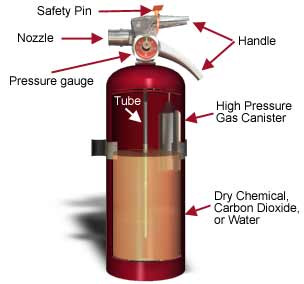 Your Extinguisher must fit the fire!

Type A - Ordinary combustibles, such as wood, cloth, paper, rubber, and many plastics.

Type D - Burning Metals, such as Aluminum, and magnesium, which will explode if water is applied to it when burning. 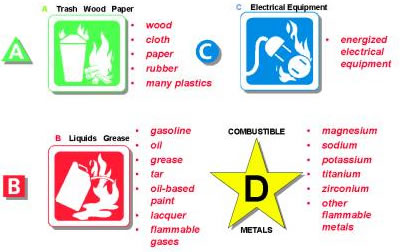 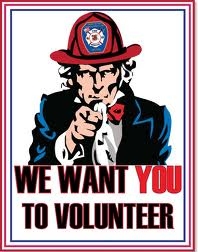 This site has been viewed 70,133 times.
Calls
News
Events
Pictures
Apparatus
Maintained by the members and staff of Mountain View Fire Protection District. Designated trademarks and brands are the property of their respective owners. Copyright © 2006-2022. YourFirstDue Inc. All Rights Reserved. Content on this web site is supplied by Mountain View Fire Protection District. YourFirstDue Inc. cannot be held responsible or liable for any content, text, pictures, or any other media found on this web site.
Management login
Powered by